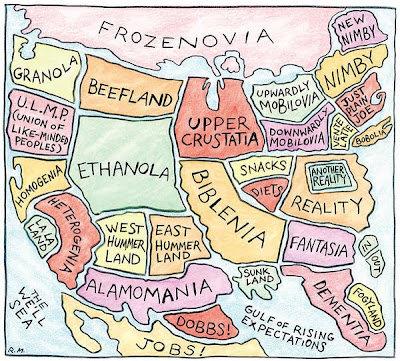 I always choke up at the end of Independence Day when all the nations of the earth come together to defeat the aliens. “That’s what it is going to take,” I think. Until something else comes along and tries to kill us we will keep plenty busy attacking each other thank you very much.

It is because of this Charlie Brown optimism that I am going to read S’quatch’s reccomendation- The Big Sort.

S’quatch says it explains how America got the way it is, a collection of myopic cultural enclaves turned inward toward their own interests and beliefs and disdainful or hostile of those who do not share those beliefs. I’m talking about the so-called culture wars, or I think I am.

I made a recent foray into the quest for bi-partisanship and civil discourse by introducing two friends by means of a popular internet-based social networking tool. One friend, whom I would characterize as quite liberal/progressive/anarchist, a true secular humanist, adept at ranting about issues of civil liberties, the green movement, and the unhealthy relationship between government and multi-national corporations.

The other friend is what I would consider a devout Christian, a man who views all things through a spritual lens, or is capable of doing so if asked. He also believes the relationship between government and multi-national corporations is unhealthy, and he may not believe that global warming is manmade exactly, but does believe the scripture commands us to be good stewards of the gift ( I think that is right.)

I’m thinking one speaks apples, one speaks oranges, but they are both fruit right? Both guys are in their way smart and eclectic, and gifted with words. I was hopeful for spirited debate and broad-ranging dialogue. It didn’t happen like I pictured. I think the corporate world would call my error a “bad roll out.”

What a shame I thought. So now I am about to read this book that will hopefully help explain how we got so divided that not only will we not listen to one another, but the sound of each other’s voices sounds like those styrofoam peanuts rubbing together.

Here is an example.

I see a “Choose Life” license plate and I don’t think to myself, that person values all life as holy and is deeply hurt by the thought of a mother choosing to end a pregnancy.”

I think to myself, That person thinks they get to tell everyone what to do and how to be. They can go to hell.

You see? Lots of anger there. I know I’m not alone. We are all tired of being shouted down, but are we tired of shouting?

I’m going to read this book. I hope I find some answers. The question I have for you is, what is the point? If we have gotten to where we are by shunning those who aren’t like us then why go backwards? Everbody knows that long breakups are the worst. Is there more left to say at this point other than kiss my ass?

← The Ascetic
We give up to have →

14 Responses to Excuse me, you’re standing on my rights…