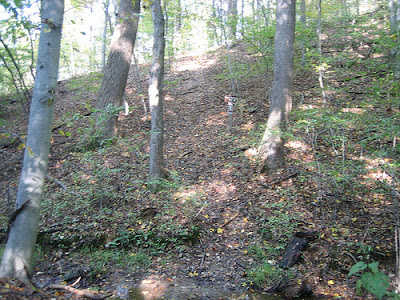 Sasquatch here, playing Ed McMahon in Juancho’s absence. Juancho asked me to organize a few guest spots while he’s away. Rumor has it Big Worm has a thing or two to say, and I may have a post in me if I can find the time. Aucilla Sinks always has a shiny two cents, HiTops is steady at the wheel, and Fat Lad could throw a nugget or two at us from across the pond. If these folks, or any of the other fine circus crowd wants to cue up for a post in Juancho’s absence, shoot me an e-mail at yosasquatch@gmail.com and we’ll have a sit-down. I’m already a little drunk with power.

Today’s guest blogger is our own Wrecking Ball, who’s got a thing or two to say about fighting the good fight. Tuning in to W.B.Z.N.:

Climbs are good. You hate them when they are happening, but the ride back down wouldn’t be as sweet without the pain. Some master force is after our climbs. We will all be weaker for the loss.

Many years ago, a random guy on a bike had informed me, that the Winn Dixie hill on the Fern Trail was going to fall to progress. I had been riding a scant ten months and it took me most of that to master that hill. It took six months for me to ride the 2×6 crossing the creek. I cursed that hill every time I rode it. Still nothing could have prepared me for when John Harvey and I had the last ride before the bulldozers. The next day it was gone.

People have their eye on the Oak Tree climb out at Tom Brown. Sure it’s a good cause and the city needs a disaster command center, but I say it’s all part of the plot to weaken us as a group. No will to climb, no will to fight. They will jerk the leash and we will have no wolf left. The poodles we become will yield to the master.

Today I was riding the Greenway or as we call it “up hill both ways”. That God cursed climb has given me more beat downs than I can count. They were cutting in the new road for the development I have been hearing about for a couple years. Is another climb in danger?

I have been accused of building houses on the grassy knoll, but consider what I am saying. Without the climb we are nothing and the act of bombing down is meaningless.

4 Responses to Memo to "Progress" : Climb on This.