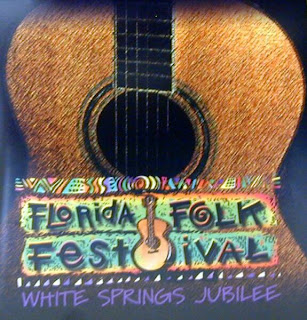 Juancho is still still off gallivanting in the greater southeastern wilderness of Tennessee with his cell phone off, so I’ll keep things going with another post.

I spent the weekend at The Florida Folk Festival, which was rescheduled from Memorial Day weekend to Veteran’s Day weekend this year because of wildfire smoke across the region in May. I grew up attending the festival — we’d make the pilgrimage up from Manatee County every year — so it feels like home to me. It’s usually hot, sweaty, soulful fun, punctuated by dips in the Suwannee River. This year the weather was perfect. It was cool and bright, and in the evenings the campfires were absolutely necessary.

Every year I marvel at the number of families who are bringing their children up with folk traditions. I keep thinking with all the electronic distractions, the number of clogging, picking, fiddling, square-dancing, and country harmonizing twelve year olds are bound to trickle off to the young-uns of a few families who live off the grid near Live Oak, but every year there’s another set of fresh-scrubbed children and their sturdy, square-shouldered parents on the Old Marble stage. I had so many moments of sublime listening pleasure at this year’s festival I broke out in anticipatory goosebumps just passing through the gate into the park on Sunday morning.

And the riding was fun, too. White Springs boasts the Bridge to Bridge trail and trails at the Shoals, and they’re well-ridden and tended. Picture bright sun reflected off palmetto scrub, gatorback bumps, Suwannee ridgeline with the occasional view of black water and white sand, startled birds of prey, and nobody around but you and your crew.

There’s also The Suwannee Bicycle Association, which lives in a big brick storefront off one of the main streets close to the park. It’s the ultimate clubhouse for local cyclists, complete with comfortable sofas, a lazy dog or two, a big screen T.V., and the cycling version of Hee Haw girls. These folks sponsor the IDIDARIDE, which is a 50 mile off-road tour where they cobble together a route from the local trails and throw a huge party afterwards. I stopped by the clubhouse to pay my respects, and they said the IDIDARIDE had 200 registrants the first three days. These mountain bike “tours” are damn popular. Makes me think we should put something together around here. What would we call it? Where would it go?