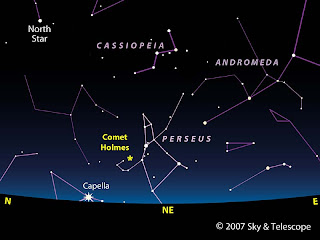 The party was in full swing Sunday night up along the Ocoee River road. Bird was chopping wood wearing a blood-soaked sock from an earlier wood-chopping incident. Shawn from Auburn was strumming a new tune called “road head” and people kept trying to drain the last drop from the bottle of Booker’s bourbon. Although we were miles from the sea, or even a decent grocery store, the Raw Oyster Bar was doing a brisk business about thirty feet south of the fire.

I wandered out to the road for a breather, and the air was cold, cold, cold. Staring towards the eastern sky I identified Pleides, the constellation most known for having an 80’s video game named for it. Looking southward I noticed that kite-like constellation and at the left end of the kite stay was a large fuzzy star.

Now wait a minute, the tumblers started aligning and dropping, and I remembered something from the radio (public radio thank you very much) about a comet that inexplicably magnified itself a million times. They said it looked like a fuzzy star. The Comet Holmes.

You have to say it like Cheech Marin though, the Comet Holmes.

A small crew joined me in the road and we all got our comet watch on. A mix of laughter, stupor, and genuine awe- a bunch of good friends, celebrating the 17th annual Cheaha Trip beneath a bona fide astronomical miracle.

The Thunder Rock Express trail was waiting for us in the morning.

4 Responses to The Comet