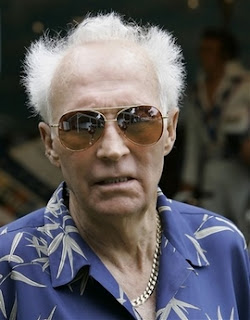 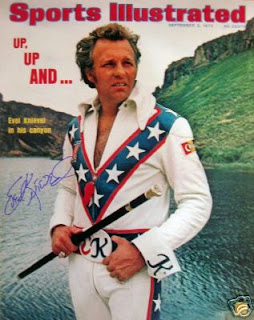 Back in 1995 when I was in my yonderin’ days I drove from Bozeman to Butte Montana for the annual “Evel Knievel Day” festivities. As a young perspiring writer I intended to interview the man, write it up, and then report to work at Rolling Stone magazine sometime the following week.

The star of the weekend was the town of Butte, with the yawning metallic waters of the Anaconda Mine, one of the nation’s most magnificent Superfund sites. I paid admission to the viewing tunnel and heard stories of men patrolling the toxic waters in Spring to dissuade waterfowl from mistaking the pit for a lake. The job seemed to focus on firing rounds from a shotgun to herd the birds on to better options.

I remember eating breakfast in a place that featured a full length diner counter paired with a full length bar. Keno and offtrack betting activity continued around the clock, as did the scotch and pancakes. I enjoyed a bit of everything the place had to offer, losing a few bucks on Keno because I was too young and self-conscious to ask anyone to tell me how to play Keno.

I noticed an imbalance in the population that leaned towards the hydrocephalitic and the strabismal which both fascinated me and filled with disquiet.

I discovered Evel at a city park, which was being named in his honor. He held the infamous black cane, and I wondered if he had enough bile left in him to swing it like he had back in the day.

The crowd was small and it was early, about 10:00 in the morning. I maneuvered into the crowd of autograph seekers and well-wishers and easily found myself shaking his gnarly hand. I asked him if I could ask him a few questions for an article I was writing about his hometown. His grip tightened on that cane and he spit. All the while looking away behind his Carreras he said, “If you don’t need nothin’ here, could you step aside?”

I bought a picture and he signed it, “Kiss my ass, Evel Knievel”.

Actually that part is not true, he just signed it, “Evel Knievel” but the kiss my ass was implied.

Honored here today as a Great Enemy of Moderation, Evel Knievel may you rest in peace you ornery son of a bitch!