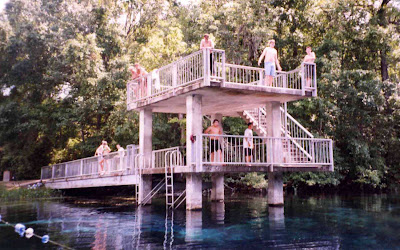 Did anybody read about the guys who were going to make a seven hour, seven mile dive in order to verify the connection between Wakulla Springs and some hole in the ground elsewhere? In doing so, they would prove beyond a doubt that all kinds of filth from all kinds of places is ruining our mysterious waters. Mainly though, I bet they just wanted to do it because it would be ‘epic”. Not like, “I rode to Munson and then rode it backwards, it was epic.” More like, “I rode to Munson while on fire.” That kind of epic.

It has been well documented that Juancho is a fan of caving. Wiggly, squirmy, muddy, dark caving where you are completely surrounded by air. Not much of a fan of anything without immediate access to air. I could have nightmares just from talking about what those guys are up to, or down to, in this instance.

I’m just saying, it seems like I would have heard by now if they made it through or not.

Now, about this issue of lights. Everybody keeps telling me to get a light and go night riding. “Riding at night is so awesome!” “I love to ride at night, I’m more one with the forest.” Or they say,” It’s so quiet and peaceful at night.” “Sometimes we play capture the flag.”

Let me tell you what is really going on-

These people don’t have jobs like mine where they can ride at 10:37 A:M on a Tuesday morning. I know what it is like riding at night, it is dark. If I succomb to the night riding schedule it negates everything I have worked for to separate myself from a 9 to 5 lifestyle.
Every time I try to get out, they pull me back in!

And those lights, I shouldn’t have to decide between paying the rent or buying a flashlight for my bike. That’s just not right.

And what about the little forest creatures? Aren’t you disrupting their cycles? A group of riders with HID/LTD/BIG/ABC headlights looks just like the Alien ship in Close Encounters (A movie from the olden times for you younger readers) floating through the forest. It is terrifying I tell you.

Anybody got one I can borrow?

← Don’t Never Did
Bikes I have loved, no pictures necessary. →

17 Responses to Water and Light