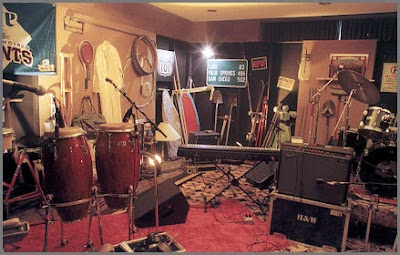 I may have mentioned it before, but along with terra cotta pottery salesperson, pool boy, and the guy who put all those Tallahassee Rock Gym flyers on your car in the late nineties I have also been a rock and roll band manager.

In fact, I have helped more than one band avoid the glare of the limelight, the stench of success, through my ham-handed negotiations and poor advice. You want my guys to play 3 hours on a Tuesday morning for $37.50? Shake on it. Penny whistle solo? My idea. Why did I do it? Why did they let me? The answer is always the same, nobody else wanted the job.

Rollerball, which spawned the critical and fan favorite, Herman Jolly, was first I think. Look it up, that much is true, but I really cut my teeth on Sidney and the Elcan Boys, booking them in every dank dump in this college town except the good ones.

Those boys are still playing in a garage in town, every week for years, and something strange is happening. They hardly suck at all anymore, and last night they put their rock and roll foot in it.

They leave me no choice. I must get them a gig and I need your help. Who wants to have a bunch of almost 40 punk rockers come over and play such hits as Hey Mr. Dot-head(SELL ME SOME BEER!) and ‘Roids?

It’s a better deal than it sounds. I am sure Wreckin’ Ball will promote it for me and we will seriously rock your house, office, or church basement.

← Room for Everyone
Have a Seat →