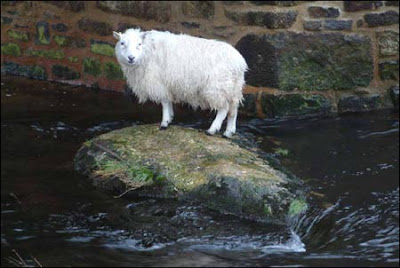 I stayed up kind of late last night gripped by stories of moutaineering survival while reading
In the Zone by Peter Potterfield ( why does that name make me giggle?) In this compilation people huddle in the snow at 20,000 feet broken and battered before somehow crawling on bloody stumps through glacier fields and across crevasses to safety. Death is a character in almost every story.

I haven’t done any high mountaineering, but I have certainly gotten myself in some outdoor predicaments and probably have a few more in my future if I continue going on trips with Mystery the Untameable Stallion. In terms of survival it seems like two ingredients are essential: skill and will. Wanting to live is apparently not quite enough, you have to know some basics.

In my early climbing days in Montana I went out to the crags with Scott, the bartender from The Filling Station in Bozeman, MT. He was older and took me under his wing because we shared a last name, a cynical disposition, and a tendency for late nights. Scott chain-smoked Camel non-filters and talked through his teeth. He was a world-weary thirty-five to my dewy twenty-four. He wore his hair in a scraggly ponytail and enjoyed the full musical spectrum from Golden Earring to George Thorogood. One afternoon we climbed some unnamed cliffs out towards Norris Hot Springs. Upon reaching the second-pitch belay and rigging a rappel, I pulled out my “ATC” belay device and prepared to clip in and descend. Scott looked at it and asked, “Hey, that’s cute let me see that thing.”

Then he tossed it off the rock. “Now how are you going to get down?”

My mouth went dry and I shakingly reached for one of his smokes, as I thought perhaps I had made a horrible character judgement and Scott was about to kill me.

Instead, he taught me a skill that could one day save me. I learned how to build a carabiner brake system up on that ledge, improvising with gear we had available. Scott was adamant that just because I was from Florida I didn’t have to become a naive mountain casualty. The lesson has never left me.

-and my Mom worries if she brings me a triciclo from Mexico I will get killed crossing Monroe street on it.

← The Soloist
All Day Long →