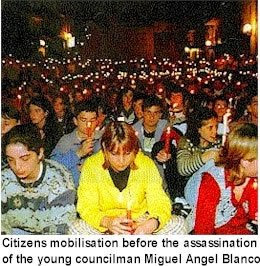 The only time I remember participating in a mass gathering was in Barcelona, 1997.

The Basque Separatist Movement, known as ETA, kidnapped a man almost my same age- Miguel Angel Blanco. If he was American we would call him Mike White and forget the middle names. Mike was a small-time city councilman for some political party or another, and I guess that is why he was kidnapped. He played drums in a couple of rock bands and used to work construction with his dad.

I know all of this thanks to Wikipedia, because at the time it happened nobody mentioned the rock bands or his dad.

ETA demanded that all ETA prisoners be transferred to prisons located within traditional Pais Vasco land. The government of Spain refused to negotiate with terrorists. ETA issued an ultimatum and a deadline. Meet the demands or Miguel Blanco dies from a bullet to the back of the head.

Barcelona you may know, is not part of the Basque tradition, it is part of Catalunya and has a rich heritage and distinctive cultural identity from Castillo-Leon and the world of Madrid. In fact, Spain is made up of many distinct cultures and historically separate territories just like we in the United States. You think Austin, TX and Sheboygan, WI are different then try Bilbao and Asturias.

As the deadline approached with no movement on the part of the government (what could they do?) people began massing in the streets and plazas all over the country. The people were begging for mercy.

I was an English teacher at a shady language academy full of mostly Irish instructors and we drank wine early in the mornings with our coffee and cigarettes murmuring foreboding thoughts about what might happen.

The evening of July 11 it seemed all of Spain was outside and on their feet.

On July 12 someone shot Mike White in the back of the head twice and dumped him on the side of a rural highway somewhere from what I remember.

I am not certain it was the next day, as it may have taken a few days for the grief and shock to coalesce into something different, but a national moment of mourning was declared. I was teaching a 14 year-old girl some good American slang and coaxing her to repeat, “Y’all come back now, ya’ hear” or something like that when she put her pencil down and went to the window of the classroom. She said it was almost time so we better go outside.

Down on the streets people were massing again, but not towards a central point. We just stood there together. At exactly 11:47 A:M (or whatever time Miguel’s body was discovered earlier that week) all of the cars, scooters, bicycles, and metro-rails stopped moving.

As far as I know the entire nation stood still for a moment and we all thought of this one person. I don’t remember how we knew when it was over, but all of a sudden Spain moved as one back into their lives and busy routines.