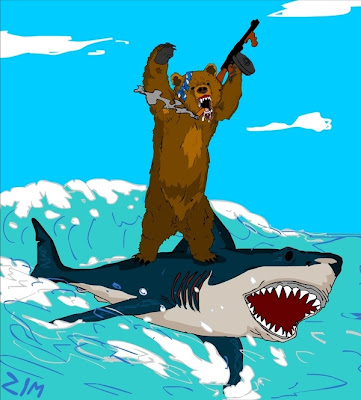 Long time reader Dr. Detroit pulled this picture of me from the archives of our hard-partying days at The White House on Pensacola street. I believe I was freestyle rapping in the living room (explains the Tommy gun) when he snapped it. I’m not sure who brought the shark.

Now the White House is gone, covered up by some apartments and a Subway sandwich shop where the sandwich artists stay busy piling banana peppers where they don’t belong and picking their noses with those plastic gloves. They don’t know Jim Morrison once slept where they keep the stainless yet somehow stained tubs of Seafood & Krab.

That the former lead whiner for the Doors once lived there is the most enduring and least exciting rumor associated with the old White House, and I bring it up to get a laugh from all the past residents who ever repeated it in hopes of persuading some starry-eyed coed to linger longer among the dirty dishes and stacks of empties while you rustled up another gin and mostly flat tonic for the both of you to share.

I crept in after the house was condemned and rummaged through the evidence. I saw bits and pieces of the lives of many past friends and roommates, most of it covered in a trickly sprinkle of homeless urine. I left most of it alone.

I’m on my way to Oak Mountain this morning to set up in one of their cabins and pass the rest of the week exploring the park with a gang of wild youth and bombing the trails when I can.

It has been more than 10 years since I left the White House, which seems like both forever and no time at all. I guess that’s how things will be from now on.

← Hello Friends-
Get Outside (Yourself) →