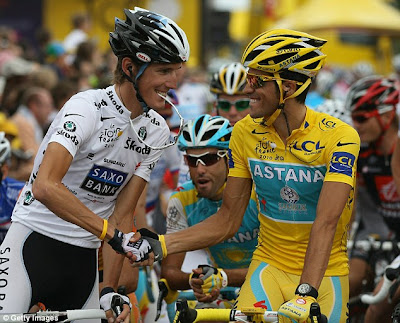 It was just a few years ago the Dogboy was watching the tour in a lazy-boy with a piss bottle and an erector set sticking out of his leg. This year it was me stove up with the the tour to live for, and now? Nada. I don’t even have the erector set to play with.

It’s over. When all was said and done it was two good friends having it out for bragging rights until next year. Two good friends surrounded by millions of dollars and euros, almost two hundred other guys with their own ideas about winning and losing, but it was always about these two riders, sworn frenemies.

Contador-Schleck
Wrecking Ball- Big Worm
Juancho- the jersey in front of him- all of you bastards.
Squatch-Hitops

Who’s your best frenemy? Who keeps you strong?