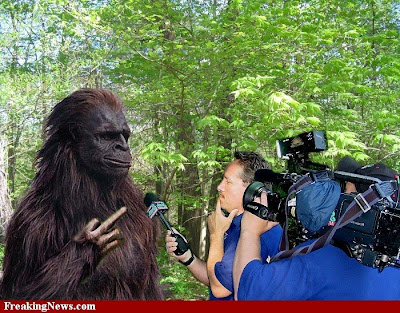 An incident of harmonic convergence happened last Friday and I missed it.

The subject of my summer 2010 formal studies, the reality television show Wife Swap, featured a family in my hometown of Sebring, FL, who are self-identified cryptozoologists. For those of you who spend time around here you will immediately recognize the significance.

I am an armchair seeker of mythical creatures myself. Long before I witnessed the black panther jaguarundi for you apologists along the bum trail in a heavily populated area of town, I held a fascination for Bigfoot, Skunk Apes, The Loch Ness monster, Chupacabras, Ivory-billed Wookdpeckers, giant alligators like Cyclops in Highlands Hammock State Park and any other legendary creature with an enduring reputation. As a child I wandered the woods between Lakewood and Sparta roads searching for skunk ape sign. Their swirled beds of wiregrass still warm, I scanned the palmetto brush looking for their veiled eyes, knowing they were near. “It’s OK!” I would yell. “I won’t tell anyone!” Words being so much cheaper than action, the great Florida apes would sit silently, and wait for me to go in search of Kool-aid.

I feel the same way about Wife Swap. For the last two months of seclusion and pain, Wife Swap has been a good friend. I watch it because it also seeks something rare and thrilling. Wife Swap is about action, not words. Wife Swap seeks understanding. To the non-observers like my friends who choose to limit contact with society, home school their child, and make their own soap there can be no discussion of the merits of Wife Swap. Their position is something like this.

1. TV is bad
2. Reality TV is the worst
3. Shows like Wife Swap are the worst of reality TV

The irony is that this makes them perfect candidates for the show.

I see it differently. In spite of producer manipulation, editing, or bribery I think the essence of the show is true. I think it has noble instincts. This is a common trait of mystical creatures. There are stories of bigfoots protecting children*, and Nessie never attacks anyone. I can’t vouch for chupacabras, but maybe they try.

To intermingle two american families of often deeply opposing beliefs is an optimistic endeavor. The non-viewer makes the specious argument that the motive is cynical and the desired outcome is humiliation. What I see is different. I see fear as people are confronted with change. I see bewilderment as they experience new ways of living. I see relief when long-established negative patterns are confronted by a stranger. I see a lot of permission to change. Wife Swap is an antidote to cynicism, not a product of it, and I feel the same about Bigfoot.

*Bigfoot Saves Baby from Flaming Camper” (March 28).
This WWN cover story describes Bigfoot’s heroic rescue of a six-month-old baby in Utah. After a family camper caught fire in Bryce Canyon National Park, Bigfoot appeared from out of nowhere and entered the flaming RV. He soon emerged with the baby in his arms, set her down, and with his fur still smoldering, rushed back into the forest.