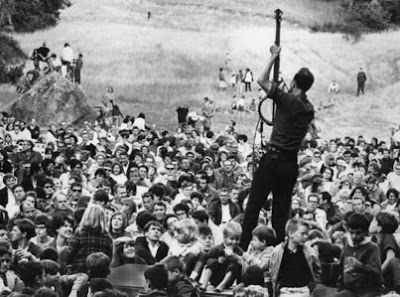 At first glance I thought this was a picture of someone holding an electric guitar in stadium. A closer look established that the man is holding a banjo and standing in a field. I am going to take a leap and assume that is Pete Seeger, titan of American protest music. I saw him just a few years back at the Florida Folk Festival and he was still at it.

I have been thinking about protest music lately, and who carries the banner for the revolutions of the world. Who can can lay claim to being the soundtrack for defiance, discontent, and indignation? What do you listen to on the way out the door, when you are headed off to your own everyday battles? What do teenage jihadists listen to as they leave their homes prepared to kill and die?

Is it hip hop?

Do you still believe in rock-n-roll?

Can Reggae possibly still be relevant?

Don’t be shy. If Eminem is the only thing that gets you out of your chair just tell us. I once left an Eminem album on repeat (that was an accident), full volume as I rode away for a day of trail battle. After hearing it for 4 hours I’m surprised my neighbor hadn’t become more of a fan. It broke him down like Noriega.

So, whether it is a bike ride, a big presentation at the office, holding hands against the oil spill, community recycling, TEA party rally, Pride parade, weekend revival, or OBAMA 2012 (Fired up? Ready to Go!)

When it is time to take your cause to the streets, who sounds the horn?

← because here is the problem
Wife Swap Bigfoot →