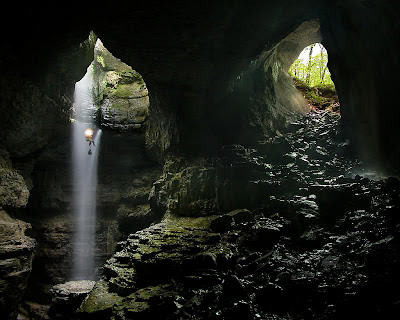 Last weekend a terrible thing happened that resonates deeply with me. Two young guys, students at the University of Florida, died in Ellison’s Cave up on Pigeon Mountain, the scene of quite a few of our annual Cheaha trips. The manner of their death so unexpected and benign, it makes me think of the many fumbles and bad-calls I and most of you have stumbled out of, discounting the razor close eventuality of a different ending. It went like this.

A group of friends with mixed experience entered the cave. Someone dropped a pack into a pit with a trickling waterfall flowing over the side. One of the boys, confident and motivated, rappelled down to retrieve it. (Was it essential gear, or just someone’s cigarettes and a tuna sandwich?) He became entangled in the rope. Was it his shirt getting wet and running into his rappel device? Another rope? Jammed beneath the cold, flowing water he waited, while his buddy rigged up to assist. Down went the second boy. Somehow, he too became stuck. What happened? There they were, in shorts and t-shirts, hanging together under that icy February in North Georgia stream. At first I’m sure they had to laugh at the ridiculous fix they were in, another present suffering for a future campfire story. Their friends waited above and they all were in communication for another half hour That’s it? Can it happen that fast?! After that it was too late. They quit talking, people went for help, but it was all too damn late. They had failed to understand the threat.

It might seem easy to armchair quarterback this one, but speaking for myself- I can see making the decisions both of them made.

They deserved better luck. Understand the threat. Learn a sense of urgency.

5 Responses to The Other Side