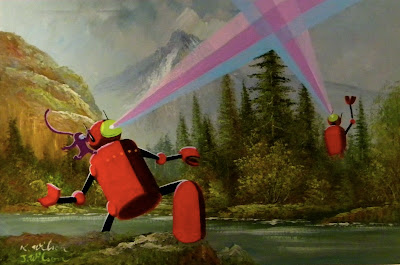 This fantastic picture is the work of John Lytle Wilson, recently of Tallahassee, now hailing from Birmingham, AL. Click the title of this post to see more monkeys and robots.

Today was a true red letter day. The full battery of robots made it to the trail for the first time in three years. One of them brought along his kidney stone, but the other two had it worse- they converted their rides to single speeds. Still, it was a big milestone for the Robot Army. Endless rounds of testing in R&D, followed by a labyrinth of quality assurance reviews, Forms SF 424’s, and liability waivers have delayed the project substantially.

In a live fire training scenario we encountered a squad of Cobra Kai riders. The RA is not yet ready for full bicycle combat so they initiated cloaking devices and blended in with the scrub oak and slash pine. Such smart robots!

Come fall they will be hunting Cobra Kai and collecting jersey pockets like ears on the battlefield. Cobra Kai’s weakness is their confidence and superior weaponry, but these robots are proud, and they will find a way!