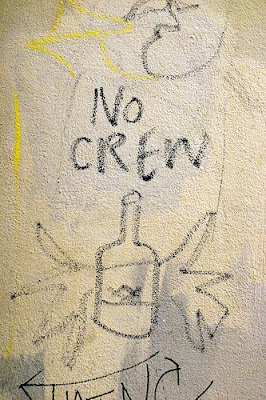 I stopped in at ZONE 5 bikes and coffee (and beer) today to see what all the hype was about. The hype is quite justified when a new shop opens up sporting 5 beers on tap, an espresso machine, a Euro lunch menu, and an Ellsworth dealership. While he had me in the spell of his shock and awe campaign he showed off the 2011-12 BikeChain Posse cycling kit. Kit is a word cyclists use to describe their clothing, a term I have never accepted. I prefer bike stuff, or manotard. Anyway, while displaying both a strong present and an attractive future, he asks me an innocent question.

Where’s your crew been?

I have to say, that is a damn good question. I can only account for Mystery, who is on temporary medical leave. The rest of this hypothetical (hypotenusical?) crew is enjoying a prolonged hiatus. Sure the reservists rearing babies account for their one weekend a month, but the former full-timers are pretty much AWOL.

One robot is running above average and quickly moving towards earning his non-robot name back, but one robot does not an army make.

BC’s got a clubhouse, and BRC ain’t even got a club.