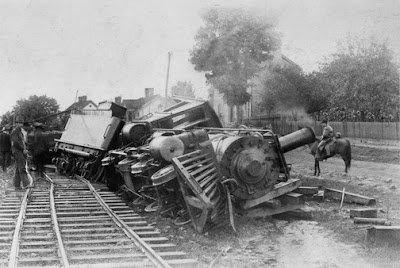 Tomorrow will be a year since I picked myself up off the road with my skateboard under my arm and my right arm twisted backwards and braced across my head. I now understand why this pain is being visited upon my Achille’s heel. My mind was trying to ignore this date, but the body demands its observance. That crash, forever known as the necessary crash, changed my life.

Without that decision to drop the car at the shop and skateboard home I could never have become a Vicodin zombie. I would not have watched every episode of Wife Swap and written extensive notes on that show’s significance to solving the nation’s intransigent political divide. I would not have gained that extra fifteen lbs that carried me into dangerous new territory. If I had not gotten on that skateboard at the top of the road and pointed it down into a 90 degree corner I would not be dropping suckers on the trails like I have been lately, and will soon be doing again. Enjoy the holiday suckers, it is my gift to you. And to those who drop me? It is a holiday for them too, because I don’t care if I ever catch them, they know I am back there trying. Rust never sleeps for any of us.

That crash, forever to be known as the Crash of Great Clarity, tumbled me through the rocks and dumped me on the banks of humility. That crash turned me inside out physically, mentally, and spiritually. I highly recommend a hard slam to the pavement if you are ever at loose ends about what you want from this life. Thanks to that crash, where my head bounced off the road like a croquet ball, I walked up the stairs to a place called Journeys in Yoga. There, I was reintroduced to my body, my breath, and my mind and I found a lot worth saving in those places.

After that crash, which will forever be known as the Great Confrontation with Reality, I walked out this front door every morning and night and guided by the voices in my head, walked damn near 50 lbs of baggage off of myself. I let the good folks at Natural Health Consultants teach me how to eat. Here’s the secret- food has stuff in it that your body needs.

This is not the Academy awards. I only won back 95% of my right arm after all, but I have a lot of people to thank. I’m not one to put people’s names out on the internet, so I’m going to do the best I can and you can figure it out from there.

Thanks friends and family for hanging tough with me when I really, truly needed help. Thanks for picking me up and taking me to Stinky’s Fish Camp all those times. That, and watching the Tour were the only fun I had in July. Thanks for Wellness Camp. Thanks for the good counsel and the deep slumbers on your couches, and the grocery deliveries. I will try to get better about asking for help before things get to the skateboard point. Thanks for that too, the skateboard that made it all possible.

Thanks to Dave B, who I ran into outside the grocery store that day. You cheered me on before I could even feel a difference, before I believed I was actually trying to change my life. That carried me for weeks. Thanks also to Walt D, who poured over the Chinese medicine book with me and helped me think through the famous brown rice and kale diet. Again, I heard everything you said that day and I wrung months of encouragement from our conversation. Thank you Bill and Sonia, for hooking me up with the yoga. Bill told me “It’s your body Juancho, you can do whatever you want with it.” It would have been far easier to never mention yoga to me again after the first 30 sarcastic remarks out of me. Sometimes it just takes that many tries. Hey y’all, that’s your body right there, you can do what you want with it.

Thanks to my riding buddies. My desire to not just return to the bike, but to shock you all with a true return to form has been the burning coal in my heart from September until today. I did it for all of us and I hope you believe that. Thanks also to the greater cycling community of Tallahassee and beyond. I have never been one to ride with anyone but the same poor saps I write about all the time. That is complicated enough, but this year I have enjoyed rides with:

BC crew
Tallahassee Mountain Bike Association,
Thursday Night Forest Loop,
Dogboy, Nat King, and Uncle Todd for administering some sublime beatdowns
the Robot Army
Some Mexican guys on their way to their restaurant jobs
Random strangers I met only by jersey color and a few miles of trail.
That one road ride

Every ride matters for all kinds of reasons.

And thank you, my internet community, for taking that ride with me.

See you on the trail,

14 Responses to The Anniversary