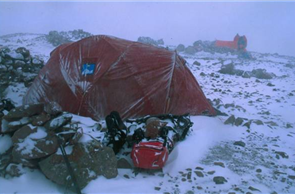 Do you see that tent in the post below this one? Do not buy that tent. That tent is screen on all sides and it has a specially designed vent that funnels cold air directly into the crack of your ass. I feel very lucky to still have my someone special in my life. Much like the celebrated 2008 trip to Bed, Bath, and Beyond I avoided a horrible bike ride by shopping for comfort. In order to survive the 26 degree temperatures we drove into town in search of insulation. While we explored the halls of Wal-Mart the rest of the gang went for a bike ride, sort of.

12 miles in about 5 hours involving a lot of walking and pushing bikes, that is the report from the first ride. The day was nearing darkness when the Dogboy rode into camp alone. Riders were scattered all down the mountain he said, and a ride would probably be appreciated. Ma Ingalls and I loaded up in the truck and bumped along down the mountain road with a box of canned beers for the bonked. The first rider we came along was Tommy, and he happily got in the truck. The second rider was my friend Big Dave, riding a 1988 Trek Antelope 820, aka the lead sled. He wears running shoes and his bike has one toe clip on the left side. He wears a buck knife on his belt. He pedaled along just below walking speed, but he refused assistance. “Maybe on your way back,” he said. The next trail refugees were Pa Ingalls and Mystery– the Un-tameable Stallion. They walked side by side with their heads down, arms locked out pushing handlebars. They were a sad pair indeed. They loaded up in the truck, Mystery reclined across Tommy’s lap as he could not bend his legs without cramping. Another mile down the hill we found Panama City Thomas, gamely pedaling. I took his bike and he crawled into the bed of the truck.

On and on we drove down the hill, almost to the highway. Our very own Magnum, left for dead by the others, was cranking along in silent agony. He went into the truck without a fight. He later admitted that he heard us coming and got on the bike to make a good show of it. I suspect he was truly turning the pedals though, broken but not unbeaten.

When we got back to camp, Big Dave was at the fire enjoying some suds and preparing to go find some wood to chainsaw. We’re going to put him in the Clydesdale Hall of Fame for that performance.

The Cheaha trip produces stories big and small, and this is just one of them.