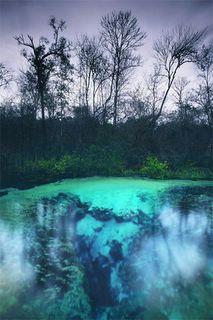 “Wait a second so I can roll up the window”, he tells me. So I wait, then we promptly jump out of the car and lock the keys inside, including the spare key I gave him at the beginning of the trip when I said, “Take this key, in case I lock my keys in the car.”

Why do these things always happen to us? It is an interesting question. When the Hardman and I are at-large in the world, something changes. The stakes go up. Common sense goes down, and then things start to get interesting.

It had been an epic weekend, where all expectations were met beyond my hopes. When does that happen? OK, so I got my ass shellacked at San Felasco, and Razorback damn near killed me, but oh man, what a way to go. Tired smiles tattooed to our faces, we roll up to the Springs to squeeze in just one more moment, one more feeling, one more good WOW! before coming home. Thunderstorms are brewing, the air is unsettled, swirling and charged. AAA is called. They will be here sometime around 2006. The ranger reminds me of myself in some strange way, like a version of yourself in a dream come to give you direction and guidance.
He told us he would leave the gate unlocked and we could let ourselves out. He saw our cold cans of Guinness, knew we had nowhere to be for a few hours, and chose to trust us with the keys to the palace. I think he even considered having one with us.

So there we are, alone in a place that sees thousands of visitors in the summer. I pitched the tent, just in case nobody was going to come. Under the new moon the world was black. A carpet of fireflies lay undulating through the trees and over the water, as far back as your eyes could penetrate into the surrounding swamp. Soft heat lightening and blinding strikes lit the sky intermittently, exposing the naked world like a polaroid snapshot.

We swam, we wandered, we waited.

Unfortunately the locksmith came, like a bouncer at last call. When I close my eyes right now, I can still hear the rain in the trees and see the shadows of draping spanish moss enshrouding a wild, holy place.