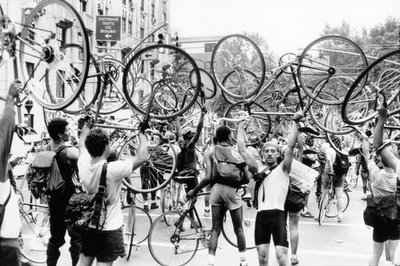 Dressed in his best goomba leisurewear, Joe rolled out on his Kona commuter. Surrounded by his capos and lieutenants, he was going downtown to meet with other families in the bike community.

We were there to make sure they kissed his pinkie ring.

I swooped alongside him on the 1989 “Red Rocket” Dakar, modified for the urban singletrack. S.B. led out on his Voodoo 29’er, his tiny toy dachshund-type dog Beauty, tucked deep in his messenger bag, clipped in of course.
Bushy was in full race regalia. I think I saw him shooting goo packs before we left the neighborhood. Puzzled as to the agenda for the evening I sighed, bemoaning the fate of being a soldier in this family, never knowing what you may walk into next.

Beneath the yellow lights of the gazebo on Park I could see about 20 riders gathered. It was the Fixie Crew, a gang of young upstarts making waves in the city these days.

“Look at ’em boss, their bicycles don’t even have no gears.”

“Relax boys, I do business with these gentlemen.”

So the meeting slowly winds itself up and into an actual meeting. A young buck with tree trunk legs and a mellow disposition calls the gangs to order. Apparently April is National Bicycle Month and the goal of this sit-down is to coordinate the various events and efforts so as not to step on any toes.

Coincidentally, the Circus started touring in April ’05 so hey, let’s do something right? I add my event to the calendar… “Sometime in April, off-road ride, followed by grilling and Guiness somewhere on or near 10th Ave.” Pretty organized of me on such short notice don’t you think?

I’ve got to hand it to the fixie gang, they are hammering out a scene for themselves. “Bike-in” movies, Checkpoint Races, Huffy tosses. They are so motivated it’s exhausting. It’s working for them too, these dudes aren’t slow, and they get all the cool, sulky, tattooed and pierced young ladies as well. What do I get? Obstinate curmudgeons bickering on the Net.

What can I say? I’m into fat tires forever.

(After sitting Bushy down 4 of 6 games)

Juancho: I own you.

← A Call to Arms
Adoption Announcement →