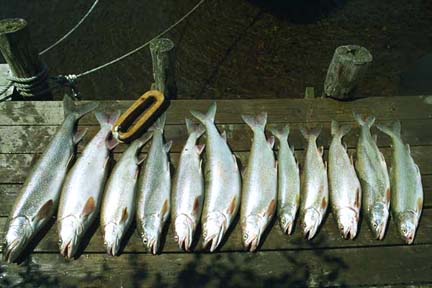 The Thursday night Dirt races are being called “The Fish Slap” and after a bit of confusion it makes good sense to me. What could be more rude than a hearty slap across the mouth with a dead mullet? Racing your ignoble ass around a retention pond behind a Church’s Fried Chicken has the same debilitating effect on your self-esteem. It hurts. It’s smelly. It’s insulting.

All in the name of good fun of course.

Bushyhead and Scotty B. have diligently ridden and mapped the Munson Hills area forest trails with a mobile GIS beacon doohickey and state of the art maps are soon to follow. This is a pretty big deal in a riding community that has long avoided any comparisons to being a “community”.

Aucillasinks has continued his decades long labor of love on the Fern trail system and probably carries more historical knowledge of attempts at organization of the MTB community in Tallahassee than anyone else in town.

Flash is chomping at the bit to stage a coup and get organized. He doesn’t really work so he has the time to coordinate efforts. He also takes nice pictures and everybody likes a nice picture.

Our southside trails are in danger from development and talks of relocating the stupid fairgrounds, so maybe this is a good time for these Al Quaeda-like cells to come together.

I think it is time to convene a meeting of the high council over here at 10th Ave.

Do we have to become an “ORBA”(Off Road Bicycle Association)? Couldn’t we call it something else, like the Pedal Viking Marauders Club? The Peter Pan Society? The Well Established Anti-Establishment Velociteers? The Dirty Dirt Gang? Just let me know when I should stop here…
The 2.1 Association? The Seven Hills Samurai? The Baseball Furies? Singletrackcorp?

Maybe I should ask Big Worm?

Jeez, I just want to ride my bike man-