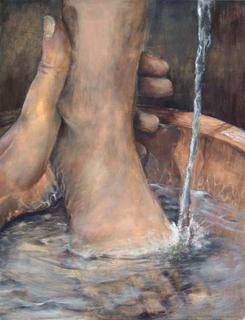 “If it was Sunday morning, and you met at Lafayette park, and Bill O was there, you went to Bike Church”.

If indeed Sunday morning’s ride was bike church then it is safe to say I spent the morning in Sunday School. The gang that showed up for the ride was a definitive “who’s who” of mountain bike fast in Tallahassee. I was determined to hang on as long as possible.

Under my new training regimen, rule number one is to put on the humility hat and wear it. No excuses, no avoiding pain. I can continue to be the happy go lucky rider I have been, or I can admit that I want speed and am willing to sacrifice to get some of it. The real sacrificing began Sunday morning.

Bill O does not like trails. If another bike has crossed a piece of ground before him, he is not interested in that course of travel. Bill O is a Magellan, who sees lines and trails where none exist. He led us into the forest.

Before we even got out of town, Sasquatch took a nasty over the bars fall and had to turn back. Mystery was along , and I considered him a shaky ally at best, as I figured he would keep up with the pace, leaving me alone in the forest very soon. No matter, the humilty hat and the sound of my crying would keep me company.

Sand is the true teacher. If you want to feel the effects of a few extra pounds, or a weak cardiovascular system, you consult Coach Sand. This ride was all about the sand. It wasn’t long before we were stretched out, each to his own misery or joy, trudging uphill through a sandy, briar-choked chigger metropolis and my head felt like it was going to pop.

This group, they make haste. I believe we crossed through some pretty meadows and whatnot, but there was little time for resting. Occasionally I would catch up, which would cue the gang to ride off again, having satisfied their duty and responsibility to me. Truly, they were too kind.

3 hours later we rode out of the forest onto Springhill Road, not close to home, but at least I knew where we were. It was the logical route back to town. A good fifteen miles from home still, it was going to be a huge effort just to get back under my own power. Three of us headed back, while the rest rode into the forest again, headed for Crawfordville highway, another hour of bushwhacking, granny ringing effort before they too would have to log another 10 + miles back to town.

I’m calling it a solid 30 miles, largely in the forest, while the rest of them probably logged 50. Those are big numbers for the beginning of summer, when the rides often get shorter due to the heat. Consider me enlightened.

And to the deacons of bike church- Thanks for a great ride, and for letting me wash your feet.