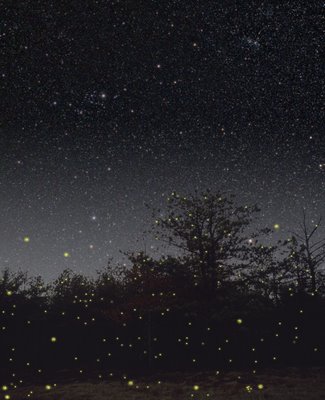 “You can catch a lightning bug and put it in a jar, but you can’t catch a summer evening and put it in a jar”. That’s what I was thinking as the Fern trail lit up with green flashes on the way home. The ride was a little longer and faster than I anticipated and I felt great.

15 riders left Joe’s at 6:00 O’clock and now there were 4 of us headed back the the shop. As singles and pairs– folks peeled off and headed home, shooting along on their own local routes, foreign to me.

I was expecting to meet Big Worm and a couple other guys, but when I got to the shop the place was swarming with jerseys red, yellow, purple, blue, green and bikes in as many different colors. Joe and Pete were lounging in the deck chairs, tired after a long day of holding down the fort. Seeing this group off was the last item on the agenda. The air had a pre-race buzz to it on account of the overlapping crowds and the inevitable itch to sort out who’s in charge. Few people draw enough water in this town to muster three or four different bike gangs for a group ride. Big Worm has that kind of pull. He’s the Tony Soprano of our scene.

We rode for three hours, carving up the Fernbrownillac area and dipping over the tracks to the Pedrick greenway trails. Here in Tallahassee you can call that a full dose. Now it was getting dark. The fireflies were blinking and my legs were really doing me proud after the big miles Sunday.

Sasquatch keeps telling me my summer motto is “No boundaries” because I went on a road ride with him and I’m riding with lots of different people. Not such a bad motto really. Juancho-bike slut- that’s me.

I would like to bring to your attention the actions of a few local boys.

Patrick, Justin, and Jason are some of those damned fixed gear punks who never seem to stop planning and dreaming big. They are headed out on a cross- country odyssey. At least they are taking bikes with gears and brakes. The BigRingCircus wishes them a safe journey and many big adventures of great suffering and triumph along the way.

BIGWORM will be out for two weeks working as a mechanic and logistics man for Phil Southerland, a type 1 diabetic, and 7 other type 1 guys. They are entering the RAAM (Race Across America) as a relay team. 25 crew members will work around the clock to support them. If you are interested in following their progress, you can link through the above page or go directly to the blog at http://web.mac.com/teamtype1

The BRC wishes them good luck and strong tailwinds as they kick ass making a statement for diabetics everywhere.

Under a new leaf-