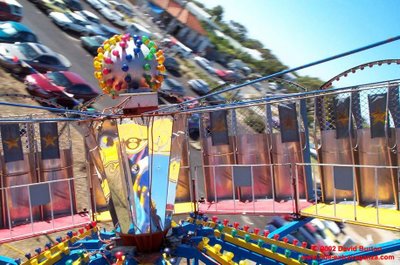 I meant to get up early and post some stellar lit’rature this morning, but instead I laid in bed staring at the ceiling and contemplating how good I feel. The general absence of cloudiness and pain as I ticked through the physical inventory. 6 Edy’s natural juice popsicles and 3 episodes of the Sopranos in a row last night, and I still feel rested and ready. I know, hard to believe after a bender like that.

On other fronts- Contrary to yesterday’s post I am not a road biker, here is some evidence.

I have manners and greet people appropriately on rides.
Hairy legs (and chest too ladies).
Cant see my ribs when my jersey is unzipped.
Never broken a clavicle
Don’t use Cytomax, Endurox, Creatine, Goo, or any other $40.00 powders.
Don’t like Coldplay or Oasis
Don’t natter on about “share the road” crap.
Like to steer my bicycle.
Don’t own a road bike (and that’s the clincher really).
Don’t wear cologne or jewlelry.
Don’t “Loofa” in the shower.

The Fish Slap was good fun as usual last night. I came in last in the TT, which was awesome of course. Then I got a mechanical thank the Lord, before the 10 lap crit got underway. A 40-something dude on a 20+ year old Bianchi kicked everyone’s ass, which was also awesome to watch. Ha-ha, I might have been last, but Larry put the stomp on you too suckers.

We are going to go plow around in the sand at Munson this afternoon, it should be great fun.

Bushyhead has built up his 4th bike of the year I think, I’ve lost track now.

This is boring I know, try living it!

Check back later after I get my game face on.

← Momentum
The View from the Midway →

6 Responses to The Roundup