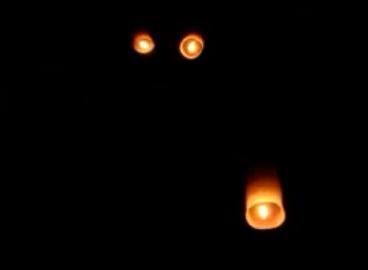 A series of unidentified flying objects was spotted in the San Diego county area last night by a number of witnesses. The exact number of witnesses remains unknown to the writer at this hour, hence the use of the descriptor “a number.”

Cynical chiding ministrated by the Press and various Public officials evoked a twinge of sympathy for the number of witnesses, whether it be ten or 100. To personally view a rare thing and be ridiculed and doubted by the stoogie masses is unpleasant at best. Perhaps one happens to see an adolescent Black Panther at rest in a familiar urban trail- a breathtaking episode in one’s personal history to be sure- only to be bargained down to accepting the tacit belief that a lesser creature; a much lesser creature- a jaguarundi in fact, may have been the creature in question? This is a sadness and an outrage.

To know that what passes for authority in such matters are those scientists who study the known world is perhaps most disappointing, for how can they be expected to pontificate regarding the unknown, which by their own admission lies well without their sphere of influence and understanding?

This is like Cinderella judging the beauty contest having only worn one gown.

I hereby renounce any implied or specific agreement that the creature in question was any other than a panther, fur black. I call on Hambone to support me in this cause.