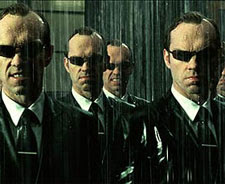 Saturday night was strange in so many ways. For starters it marked the celebration of a bona fide adult relationship that fomented and grew right before our eyes into a consensual marriage between two people, decided according to their own free will. My homeboy made that look easy man. He’s my new life coach.

More strange though, were all of these guys wearing street clothes instead of lycra. Some might say it was the homebrew that made me compulsively introduce myself to people I have known or been acquainted with for years now. That is not true, decorum prevented me from filling my Camelbak with ale. It was a classic case of worlds colliding. It was more like seeing the neighborhood drunk flying a helicopter on the 6 O’clock news. I have never seen Big Jim Slade’s naked head before, nor have I seen him wearing pants. In fact, that goes for all of the Bikechain posse except for those I knew in civilian life prior to the rise of their cult.

I thought Ricky Silk was Bill Nye the science guy for a minute.

It was strange. In order to be sure I knew the right name for the face I would use my thumb to obscure the top of their head while I squinted and muttered through their nicknames. “Is that Soup Can? No, that must be Nutter Butter. Oh there’s Soup Can!”

At least Wrecking Ball and Big Worm looked the same as ever.

10 Responses to Pleased to Meet Me