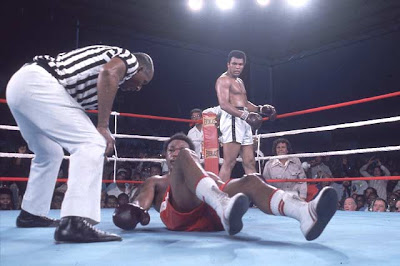 George Foreman knows what a bad day is. He traveled all the way to Zaire, now the Republic of Congo, to fight Muhammad Ali. People forget that George was the heavyweight champ at the time, and Ali the challenger. It must have been tough for George to ride through the streets on the way to the fight listening to thousands of black faces chanting “ALI BUMAYE!” Translated, this means ” KILL HIM ALI!”

Nobody wanted to see George win, not Don King, Not President Mobutu, and apparently not one African. Why? It was Ali’s time. As he was apt to remind us, he was prettier, smarter, faster, and stronger. With the world against him George Foreman went down in the 8th round, a victim of the rope-a-dope and a straight right hand.

An incredible to believe 20 years later, George Foreman completed his comeback bid to regain the world heavyweight title at age 46. The Muhammad Ali era had come and gone, yet here was George Foreman- still hanging around the gym. Twenty-one years after defeating Smokin’ Joe Frazier to win his first championship title George stood over an unconcious 26 year-old Michael Moorer as the heavyweight champion of the world.

George Foreman is a fighter, and so is the Wrecking Ball, and so am I.