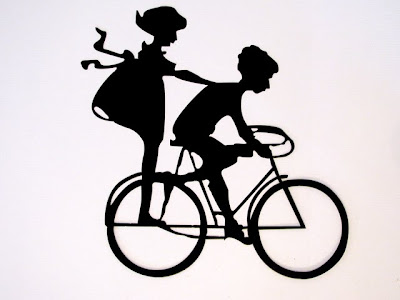 In 1985 my first girlfriend moved away to Alabama. We were pretty serious for 15 year-olds. I watched her drive off in the back of the family wagon, pedaling down the street as they pulled away forever. We wrote letters. I told her all about my big dreams of becoming an airbrush artist someday, and she told me the boys in Alabama were nothing like me, and that we would be together again. I never made it as an airbrush artist, and eventually life absorbed us in our own small worlds.

Her name faded into the mythology of my past, holding the place of First Love. I ruefully thought of her living in a separate universe from me, not knowing who she became. We were together forever and trapped in 1985.

We stayed together forever and 15 for 26 years. We bumped into each other this past summer and picked up where we left off- No, I don’t airbrush anymore. No, I don’t really break-dance either I told her about the Crash of Great Awakening, the perils of sucrose, and my commitment to reading the great postmodern novels of the new millennium. Who has time to airbrush? She was surprised to hear I was still single. With the sweet van you drive? She would say. And the angry political posturing? Single? Really? But it was true.

I said something to her in a conversation this summer that sounded familiar to her and she unearthed the 1985 Nancesowee, our yearbook from 9th grade. What I said was, “I have never met a girl like you before. Sometimes you are so funny and cool to be around and other times you are just quiet and beautiful.”

From the day I picked myself up off that pavement (June 2, 2010) a lot of good things have happened in my life, but none so good as this one. I got my girl back from Alabama and she moved in last night. We’re all shacked up.

← Circle of Strife
Tuning in →

18 Responses to The Big Secret