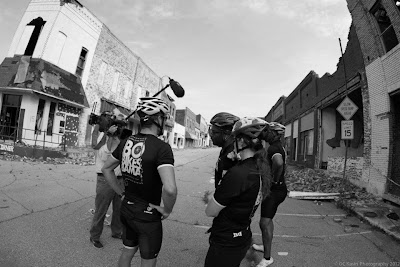 Remember Bo Jackson? If not, he is a former pro athlete who is known for playing two professional sports, football and baseball. An icon in the 1990’s, Nike promoted the first cross training shoe (unfortunately, a hybrid) with the “BO KNOWS” campaign in which he co-starred with Blues legend Bo Diddley. None of this is of much interest to me, or to most of you, unless you happen to be from Alabama or more specifically, Auburn University. What is of interest to me is that he is quietly riding his bike through the region of Alabama destroyed by tornadoes a year ago. His goal is to bring attention to a much forgotten tragedy and raise money to help those communities recover. This touches a sensitive nerve for me. I know what it feels like to put yourself out there for a cause. I’ve hosted a flopped fundraiser or two, and experienced the pride of handing over a bag of cash to someone who needed it. Carrying the flag for a cause is a tough and noble thing. That’s why I appreciate Bo Bikes Bama. His fame is mostly behind him. He is a hometown boy, trying to do the right thing. The numbers are both impressive and small. At last check, he raised $372,000 from sponsors and contributors. That’s a lot of money if it is not passing through large aid agencies, and a pittance if it is. He is riding 300 miles, which is a good weekend for some riders I know, and an impossible distance for others. Bo has the backing of the Livestrong campaign, one of the BRC’s favorite punching bags. Lance, his excellency his own self, showed up to ride a leg with BO. I am thinking maybe Bo Jackson brings out the best in folks. Bo may know some things, but I know some things too. I care about Alabama, and I care about bikes, and I’m going to give Bo Jackson some cash because I think he will spend it where it needs to be spent. Ride Bo ride! Juancho