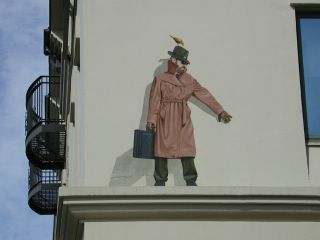 The clouds have parted and the malaise of yesterday is a bad and distant dream. I read to them all from the good book at Munson today, except most of them were too far back to listen and one of them was too far in front. It was hot as blazes, but that might have been the force of the Jamis Dragon bursting through the atmosphere. I will be absent from the circus for most of the week. I will try to post from the road, but you know how that goes. If you have a blog and try to post from the road anyway, than you know how that goes.

You know what happens when the ringmaster leaves the circus? The clowns run off and get drunk. The animals are released from their cages. The strong man lays down with the bearded lady, and the popcorn machine goes full tilt until the big top is ready to rupture. Since the beginning, all of 90 days ago, it hasn’t mattered to me if folks want to pay the price of admission (5 minutes) to join the show, or if they just want to check in now and then and think to themselves, “That guy is a jackass, I can totally drop him and write better than him”. Hell, that’s what got me started. I appreciate every click and scoff you’ve thrown my way, but in my absence, it’s going to get mighty boring around here. you might choose to play amongst yourselves. Either way I will be back Saturday and the world will be saved from certain destruction once again.

Some minutuae in your future…

Now is your chance to say, “But what about all the shit you talk about road bikers?” And my reply…What about it?

Have a great week amigos.

← Hunker Down
My town kicks your town’s ass. →

6 Responses to Out of Pocket