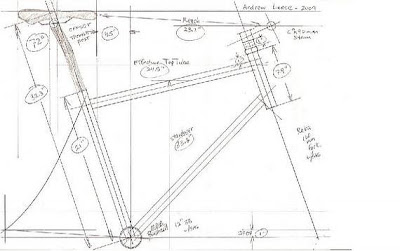 Enjoy this excellent reader submission by Scotty B, Thanks Scot!

Someone once said to me
“Ah, I am two kilos over, I show no respect for the machine!”
“What are you saying?” I asked… as we both rode home through a busy Canadian city. He pointed downward, at his bicycle – “to the world, to humankind, this thing is a gift, a fluke really. What if the gasoline had come along sooner? There would not be this!” – he pointed again, down at his bike. He laughed and clutched at his slightly fatty midsection, as if he were caressing a baby in the womb, “today I show no respect for the invention of the machine.” “But it is only June,” I said to him. “Certainly the kilometers will kill the kilos?! No?” I laughed, he laughed. We passed the Hotel by mistake. I noticed, but I was riding with a famous bike racer who had been paid more to “start” the race we had just completed, than I had been paid by my team in a year – so I kept riding with him through the crowded streets.

While stopped at a traffic light, he looked over at me and my bicycle – up and down, as if committing me to memory. “You are always there, no?” he asked. “Yes,” I replied, knowing full-well the implication of his comment. In every stage of the race we were in, I had been, daily, selling my soul – honestly killing myself – and finding – for the first time in my life – the bottom step of the ladder, the entrance to the front of the peloton.

I finished that week of racing with my head held reasonably high. The next weekend was huge though, a one day loop race up “Mountroyal” 13 crazy-ass times. This was no “sleigh ride” as I had heard the flat races where I come from so aptly defined (a race flat enough to “sit-in” the draft). I started the race wearing a new jersey. I was a member of a team for one day. A “man on loan” I think one of the team directors said. “You are from that gutsy New England squad?” someone on the team said. trying to be nice. I said nothing. I had received my bike two hours before the start and was therefor busy trying to find my “home” on the vehicle.

At the start, the hammer dropped as the gun sounded. It is always like this. Up the climb the first time I was hopelessly placed, soft-pedaling, then sprinting in my big chainring, finding a wheel, settling into a rhythm, then seeing a gap ten riders up, sprinting again, and so on. At the top I was about 50 places back, one minute down on the head of the field. The gap was closed by some huge human beings at the front.

On the flat run-in through the city to the foot of the climb there was a section of the course on an interstate highway. The highway had been closed down hours before the start, but all along the sides of the road, people had parked and were standing on the tops of their cars yelling and screaming. The wind on this section was a direct crosswind – a gauntlet of sheer hell. The “giants” at the front made this section like a nosebleed. I pinned myself against the cars in the gutter the first lap and felt the blood in my head trying to escape through my teeth.

Second time up the climb – Still in the top fifty at the bottom. Massive acceleration up the climb from riders you never even heard of. But I was there. Passing people. The rest of the race was a repeat of the exact same tactic – drill it on the climb with repeated attacks, stick the peloton in the gutter along the open sections on the run-in.

On the final lap, as we passed through the congested downtown area of the city, I found myself at the front. This was not purposeful. The field came around the corner, and there it was, clear road in front of me for the first time in three weeks of getting my ass handed to me. As we came around a right hand turn, ( I remember this like it was yesterday) I looked to my left to see who it was at the head of the train flying by me, it was the famous guy I had ridden with after the race the week before. I want to say he looked at me, but that’s probably me being neurotic. Whatever the case, there went the famous guy, with a line of other famous guys along behind. I was in the final selection of forty or so riders, headed into the final climb.

On the way up to the finish line, I saw my dead great grandmother, staring at me from the crowd. I had never met her. She was not there. At some point, looking to my left, over the edge of the road, I could see the city below in the background. I kept my eye twenty riders ahead of me, looking for the gaps to form, waiting for the “lull” before the final kilometer. Nothing. Just a straight line of riders. Finally though, something – there was no lull, but with two kilometers to the finish people began to blow, all around me. I was on a good wheel. Some guy from Denmark. He just kept going. With one kilometer to go, the gradient eased to something more like the roads around Tallahassee. The guy in front of me moved to the left to avoid someone blowing up. He looked over his shoulder at me – he was done. He was on a big team. He had nothing to prove. I had nothing, literally nothing, but I kept going.

I remember looking up and seeing the “meter signs” laid out above the fencing and the crowd – 900, 800, 700, or whatever. I could see too, the road, empty in front of the group I was in. “Was I in the lead group?” I had no idea. The crowd was still going nuts though, I went to stand up, but realized I was already standing. That happened to me three or four times I think during that final climb.

At the finish I still had no idea of my placing. A person from my adopted team directed me to the side of the road where there was a roped-off area in the sea of people, I got off my bike there and sat down. It was then I realized all the large boulders around me and the town spread out before me for miles in all directions. I drank about five bottles of water and used a few more to rinse myself.

It turns out I finished just outside the top twenty – 22nd to be exact. No one on my team said anything really, a hand or two on my shoulder maybe. I just went when it was time, and signed for my prize money. It turns out also, the famous guy I had ridden with – he won the race… then several years later, he went on to win the Tour de France. What the hell!?

What am I saying? Why do I write this? Well, I guess all anyone has is their memories… But as well, I think during those few weeks when I was certainly at my “life peak” athletically, that I learned something. I learned to “respect the machine.” Hearing those words changed me, matured me, took me to a new space in my head. From then on, I have always considered the “invention.” It may not be my “time” forever, or ever, but I will always hold a high regard for those at the front, drilling it, making me pray for my soul – for that is the truest form of respect for the greatest invention of all time – the bicycle.

2 Responses to Respect for the Machine