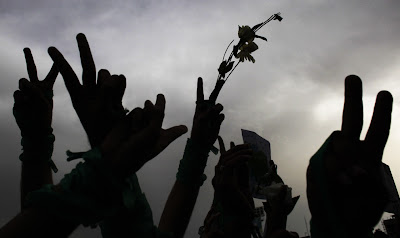 I told Tom early on I wanted it to be just another bike ride, a long-even boring- day in the saddle. Before lunch Tom had crashed twice and claimed the nickname “Crampa” as he struggled to keep up on his tiny-wheeled bicycle. I was having a different experience on Big Red the 29’er. If I wanted to pass, I passed. If I wanted to catch up, I caught up. I pictured where I wanted to be, and Big Red transported me to that place. Thought-powered.

The incentive to do a ride like San Felasco for me is to mark a place in time. The ride experience itself is less important. Creeping lines of riders crawling through the singletrack harumphing and wheezing in the dust, everyone blaming someone for something. Too slow, too rude, too aggro, too mellow. Someone taps a brake and the backlash travels back for miles down the trail.

A meniscus of dust lingers above the trail all day and you are either eating it or serving it up to someone else, and everyone gets a good taste of both.

Our little trio had few rules for the day, but the most important was to avoid mixing it up with the boys in the Black and Orange, the Bikechain posse. There are too many of them, and they think and act as one. They are like an automatic weapon on a battlefield of six-shooters. Always, another rider can be dispatched or expended just for the fun of blowing someone up and leaving them a pile of smoldering quads.

I could hear them calling to me through the trees, “Juancho where are you? We are coming to get you!” A guy in front of me said, “Jesus Christ I’m glad I’m not Juancho.” I told him I was Juancho and he immediately yielded the trail and hid behind some bushes. “Don’t let them see your eyes!” I warned him as I stomped through the rest of his pack of friends.

Trapped in a malingering crowd of weekend warriors the Black and Orange caught me and the Wrecking Ball lived up to his name. Employing his Ft. Pierce dirtball heritage he punk-rocked his way through the crowd earning whimpers of protest from the Milquetoast Docker set like, “Just tell us what you are doing please!”

What is he doing? He is wrecking you. That should be obvious and count your blessing that he isn’t coming back. We passed about thirty people by hyper-driving through the center of the pack, his son floating along the outside line like the shadow of a hunting raptor. We enjoyed open ground for the next few miles to the lunch break.

That’s a good start on the lying. I’ll cook up some more later.