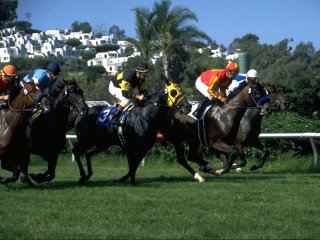 Well, I’ve been pestering these California folks to take me to a dirt track so I can ride, and it looks like today is the day. The bikes are weird though, and the riders dress pretty much like roadies with their flashy tights and riding crops. I didn’t bring my cleats so I’m not sure how I’m supposed to ride the damn thing, but I’ll catch on and deliver some east coast style beat-downs I’m sure. Apparently there is quite a bit of gambling associated with the races and Juancho is going off at 15:1. Those fools, they don’t even know. Trust me folks, this is easy money.

Upon arriving in San Diego, I began eating raw fish (yellowtail) straight from the Pacific Ocean. A neighbor fella caught it and I swear the meat was still quivering on the plate-awesome.

The Neville Brothers were in town as well so we dropped in at the Belly Up Bar to catch some Southeastern Funk and they did not disappoint. The Booze Fast was officially broken at 8:00 P:M PST on Tuesday August 15 with a glass of wine with dinner (Rodney Strong) followed by a shot of Milagro Mango Tequila. By those choices it is apparent that I became a woman this summer. Well, lucky for me I was born so pretty. A couple FAT TIRE ALE’s at the show rounded things out, and now the fast is back on. Consider this day 2.

I will be in Mexico this weekend and I don’t think they have “el internet” down there, but you never know. If I can post, expect it to be entirely in (very poor) Spanish- for authenticity.