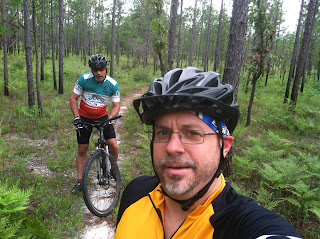 The Apalachicola National Forest after a good soaking is as good as North Florida riding gets.  The soft crunching of wet sand under tires is satisfying like popping bubble wrap, or picking at a scab.  You just can’t leave it alone.

That is me in the front, wearing the yellow jersey, and behind me is my old friend Taco.  We quit calling him that in the mid-nineties, but I am bringing it back today.  He grew up in a small town in Wisconsin, which is a state somewhere in the U.S.A.

Being of Sicilian heritage, his olive skin set him apart in the mostly Germanic and Scandinavian community.  Children, being of limited experience, assumed he must be Mexican, and named him accordingly.

That’s how I remember it anyway.

We hit the late afternoon woods under ominous navy blue clouds, but the rains had already come.  The dew on fragile ferns whished off on my ankles and salamanders salamanded as fast as they could to avoid being tracked over.  Carve and pedal, carve and pedal, the Twilight trail just gives up the love on a late summer roll.

Wrung free of the day we loaded muddy bikes into the van, both a little amazed at how great the ride was, and what a good long ride it has been.

6 Responses to Taco and Me