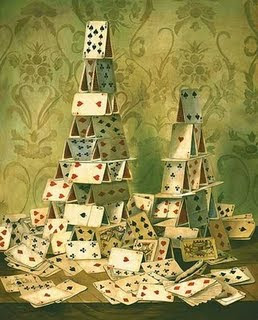 Step by step this house thing is winding down. At this point no request can phase me, no task can deter me. As I type this I am on hold with the mortgage company while some crisis or another is going on. Whatever. Figure it out. Put the bit in my teeth and yank. I’m ready. They pummeled my startle reflex to smithereens weeks ago. Now when the bombs fall I notice it less than the gentle flutter of a hummingbird’s wings.

Few of you realize the magnitude of this accomplishment. As a right-brained thinker the performance of this staggering series of tedious and byzantine tasks has challenged me beyond my previously known limits. It is like writing a novel with my right hand (I’m a lefty, like the president.) Once, at a particularly crippling point of the process, the realtor was unfolding page after page of nonsense-every word out of her mouth began to sound like “hot german potato salad” and as she talked at an earnest rate of 740 words per minute I pictured myself reaching over the table and taking the papers from her hand, cramming them into my mouth and chewing them slowly like a cow in the field. What would she think of that? I wondered.

Instead I just signed them and smiled pleasantly- a feat as impressive as landing a plane in the Hudson, or walking on a tightrope between the Twin Towers, or saving a child from a burning car- yet the only applause was my own.

Bike? Rode it yesterday out at Munson. It ain’t going anywhere.

11 Responses to Up on the wire