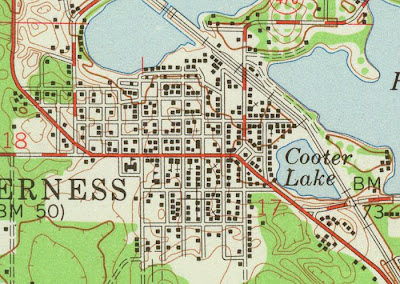 I have turned some short drives into some epic road trips over the years. 10 hours from Atlanta to Tallahassee, 5 hours from Tallahassee to Ocala, I know how to make a road trip last. Saturday we spent 8 hours getting home from Sebring, FL. Normally that is a 5.5 -6 hour drive depending on traffic, but Saturday the traffic required Depends, more than depending. I can’t believe I made the rookie move of getting involved in the amateur roadways like the FL Turnpike and I-75, but I was drowsy on gluten-based ceremonial foods and we just got carried along until we were sitting still, two among the millions migrating northward on a holiday weekend.

At the first opportunity we broke off on State Road 44, one of the few east-west state highways I haven’t explored. I knew U.S. Highway 19, where every mile feels like home, was somewhere over there. I was willing to drive through anything to get there.

The Withlacoochee River shone like a string of tinsel along the highway and Henderson Lake opened out wide across the horizon as we entered the old Florida town of Inverness. 30 minutes after abandoning the interstate we were smacking our lips over stone crab claws at Stumpknockers. Unsweet tea and Rivalry day murmuring in the background soothed our frazzled nerves, and a couple of Po Boys settled us down so much I was contemplating a room and a nap.

We popped out on U.S.19 on Follow That Dream highway and swung it north for home.